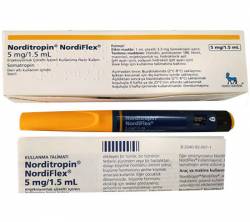 Please login to sign up for product Back in Stock email notifications.

Norditropin NordiFlex contains a biosynthetic human growth hormone called Somatropin which is identical to the growth hormone produced naturally in the body. Children need growth hormone to help them grow, but adults also need it for their general health.

Like all medicines, Norditropin NordiFlex can cause side effects, although not everybody gets them.

Effects seen in children and adults (unknown frequency): rash; wheezing; swollen eyelids, face or lips; complete collapse. Any of these may be signs of an allergic reaction. Headache, eyesight problems, feeling sick (nausea) and being sick (vomiting). These may be signs of raised pressure in the brain. Serum thyroxin levels may decrease. Hyperglycaemia (elevated levels of blood glucose).

If you get any of these effects, see a doctor as soon as possible. Stop using Norditropin NordiFlex until your doctor says you can continue treatment.

Formation of antibodies directed against Somatropin has rarely been observed during Norditropin therapy. Increased levels of liver enzymes have been reported. Cases of leukaemia and relapse of brain tumours have also been reported in patients treated with Somatropin (the active ingredient in Norditropin NordiFlex), although there is no evidence that Somatropin was responsible for this.

Keep Norditropin NordiFlex out of the sight and reach of children.

Do not use Norditropin NordiFlex after the expiry date which is stated on the package after EXP/. The expiry date refers to the last day of that month.

Store unused Norditropin NordiFlex pens in a refrigerator (2°C - 8°C) in the outer carton, in order to protect them from light. Do not freeze or expose to heat. Do not store close to any cooling elements.