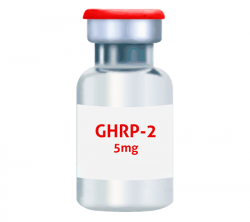 GHRP-2 is a synthetic hexapeptide Growth Hormone Releasing Peptide (GHRP), which acts on the hypothalamus and the pituitary gland to release growth hormone with a slight stimulator effect on Prolactin, ACTH and Cortisol levels. GHRP-2 is considered to be a true hGH secretagogue, meaning that it stimulates the body’s own secretion of hGH. Human Growth hormone has been shown in studies to promote lean body mass and reduce adiposity (fat). GHRP2 has demonstrated that it is very effective at stimulating GH production in research test subjects. It has a short half life with peak concentrations occurring around 15 minutes and not longer than 60 minutes after administration.

As ghrelin is released, the body becomes hungry. GHRP-6 is well known for causing extreme increases in appetite, which may or may not be a problem depending on individual need or goals. GHRP-2 will release the same ghrelin in the body, but should not do so in a way that promotes such a significant increase in hunger. Some increase in appetite is unavoidable, but GHRP-2 does tend to have a far less impact on appetite than GHRP-6. In short, GHRP-2 aids in the promotion of natural GH production in the body, which carries with it numerous performance as well as health benefits for the user.